Just got back into town from the Sundodger Invitational hosted by the University of Washington at Lincoln Park in Seattle, WA. There were 8 races; 4 College level and 4 for High School teams. It was a beautiful day for Seattle. We had nice blue skies shaded by the woods that encompass the park. The only issue seemed to be the confussion when rounding the corner for the finish. Many of the runners who were lapped followed the leaders into the sharp turn into the chute instead of running one more lap. The Kamiakin JV boys had the top 7 positions into the last lap but ‘somehow’ 2nd place was taken by a boy who ended up with a 4 second personal record on a 5k course. It was not the kid’s fault. There should have been better traffic control at the turn. 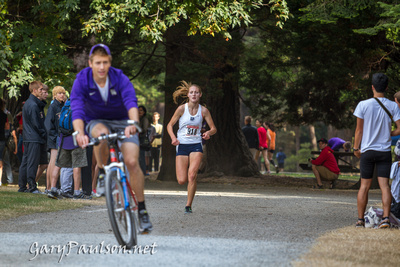 Amy-Eloise Neale of Glacier Peak High School, with a time of 16:31.12, shattered the course record, 17:21.98, set by Kendra Weitz of Shadle Park last year. She was almost a full minute ahead of the 2nd and 3rd place runners. Kamiakin as a team dominated the event. The varsity boys took 1st place, the varsity girls took 2nd, the jv boys took 1st place, and the jv girls had a respectable 5th.