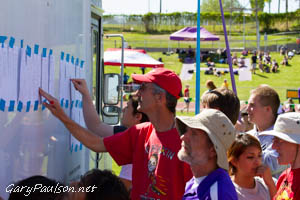 I ended up with a little over 2,000 photos. Hopefully most will be keepers. There were numerous heats of the various running events and I did not get photos of every heat. The distance races are easier because they can stack a lot of runners in each race as well as they provide a number of opportunities to get a shot of the runner. The dashes are difficult because you only get a few seconds to catch the runners and can usually only focus on 1 or 2 runners in each event.

Once again, I found myself not getting many photos of the field events. They are going on at the same time as the running events and are spread out over the area so it is hard to catch the athletes at the right time.

I will be adding the photos as I get them processed.